Italian Editor Kerin O’Keefe reviews Italian wines for Wine Enthusiast since May 2013. Below you will find a recap of the reviews of the month with the rating given by Kerin to each wine. You can find all the complete reviews in winemag.com

Togerther with the 2013 Brunellos 2012 Riservas also came out, of which a good number were oustanding, particularly two of them to which I awarded a perfect 100 points score.

The wine world is mourning the loss of Giacomo Tachis, one of Italy’s most celebrated enologists, who passed away on Saturday, February 6, at the age of 82.

Born in Piedmont, Tachis—a graduate of Alba’s Enological School—is most associated with Tuscany and Sardinia. Thanks to his pioneering vision, Tachis is the man behind some of the country’s most lauded wines, including Tignanello, Turriga and Solaia. He also had a crucial role in perfecting Sassicaia.

The brainchild of Marchese Mario Incisa della Rocchetta, Mario brought in Tachis (who was working for his nephew, Piero Antinori) as a consultant to gradually increase production while keeping quality high, and to ensure that the wine would stand up to being exported globally. Thanks to Tachis’s collaboration, the 1968 Sassicaia debuted in 1971 and is credited as the original Super Tuscan.

There was little sign of the celebrated Tuscan sun in late February as I made my way through the rain-swept narrow streets of Florence towards Palazzo Antinori, to meet Italian wine scion Piero Antinori.

Not only was I going to taste the latest vintages of Antinori’s famed Super Tuscans – Tignanello and Solaia – I was also going to ask him his views on the latest happenings in Chianti Classico.

What, you may wonder, do much-sought-after Tignanello and Solaia have to do with generic Chianti Classicos? Absolutely everything is the answer.

Once considered the future of Italian winemaking, Super-Tuscans might finally have run their course. Kerin O’Keefe considers the past, present, and future of these wines. 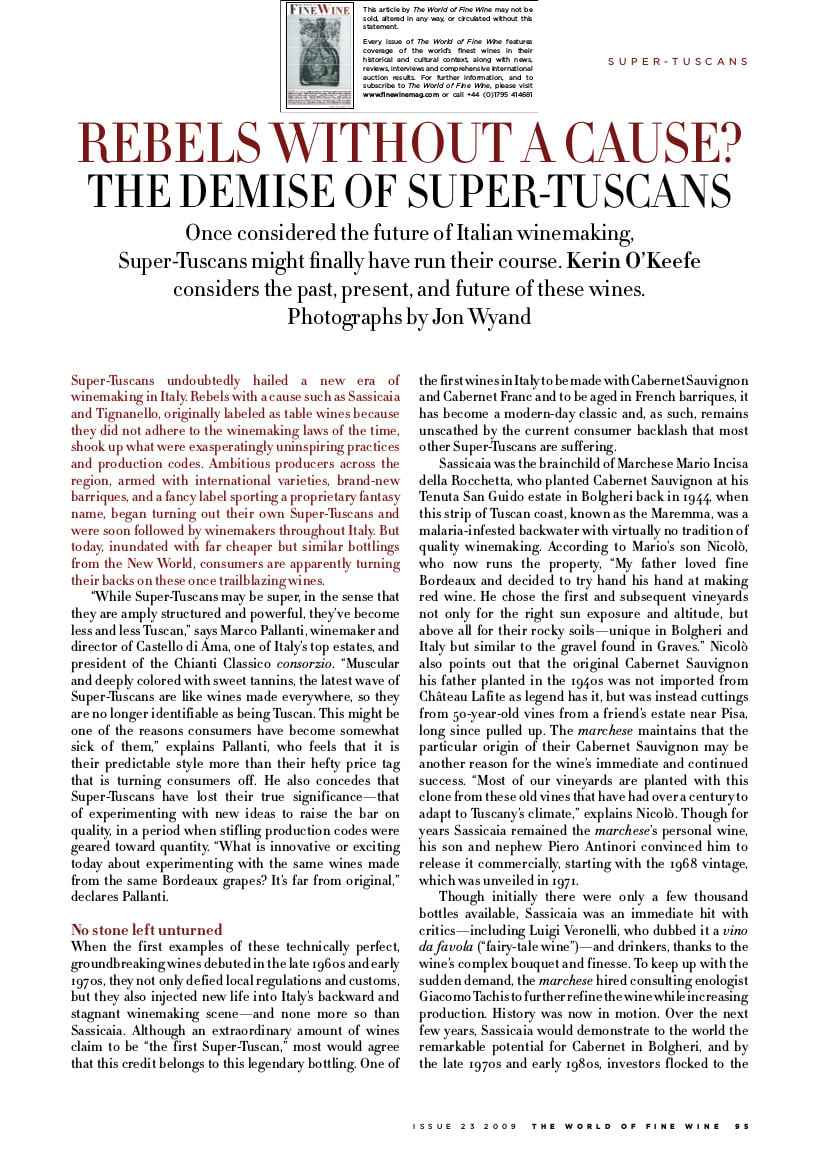 Super-Tuscans undoubtedly hailed a new era of winemaking in Italy. Rebels with a cause such as Sassicaia and Tignanello, originally labeled as table wines because they did not adhere to the winemaking laws of the time, shook up what were exasperatingly uninspiring practices and production codes. Ambitious producers across the region, armed with international varieties, brand-new barriques, and a fancy label sporting a proprietary fantasy name, began turning out their own Super-Tuscans and were soon followed by winemakers throughout Italy. But today, inundated with far cheaper but similar bottlings from the New World, consumers are apparently turning their backs on these once trailblazing wines.

Fascinating article in the current issue of “The World of Fine Wine’’, a glossy, erudite and, alas, very expensive British wine quarterly that always has many things worth reading. This article, by Kerin O’Keefe, a wine writer based in Italy, suggests that the Super-Tuscan category, which has attracted so much attention in the last 35 years, may have run its course.